It is now 12 years since the tragic Gaza Disengagement. Recently, on a trip to Halutza, I met Yedidya Harush, the JNF Halutza liaison, that gave me insight into his personal experience, as someone expelled from his home. His story struck me as a tragedy with hope and a lesson to be taught. When all was lost and they felt complete despair, Yedidya’s family continued to smile..to build..to live..and to never give up.

How does a family, so settled in their home and community, come to the realization and acceptance that they are being expelled from the most cherished place to their hearts?

The home with all their memories.

The home they raised their children.

The home they thought they’d be in forever.

For generations to come.

On August 15, 2005, Yedidya Harush turned 17 years old. On that same day, his world turned upside down. His family and 8,000 residents of the 21 Jewish settlements of the Gush Katif bloc were expelled from their homes in Gaza. Forced out for the sake of peace. A peace that never came.

Yedidya’s parents met in the Sinai Peninsula in the 1970s and married. After the peace agreement between Israel and Egypt, they were evacuated from their first home. They moved to the Gaza Strip after Israeli Prime Minister Ariel Sharon had decided to build it up for security reasons. Many families from the Sinai Peninsula were encouraged to move to this new location, Atzmona in Gush Katif. The Harush family was one of the founding families and built it up into a thriving, beautiful, picturesque community. With their nurturing, they turned the desolate desert land, into a plush, green, Garden of Eden.

Yedidya, born in 1988, only knew of Atzmona as his home with his 6 siblings, his father, a career IDF lieutenant colonel, and his mother, a school teacher. They lived a happy home life, swimming at the beach and playing outdoors. But life was not easy in the area since the 2nd Intifada. They knew of too many rockets falling, shootings and terrorist infiltration into the community. They attended funerals of friends and relatives killed in terror attacks.

None of this stopped the family from living and thriving. Their mentality through all the terror was to beat the terrorists. To win. They believed in growing and expanding. With every rocket that fell, they planted a new tree or bush.

They never planned to leave.

In 2003/2004 Ariel Sharon had different plans. He decided to disengage from Gaza. All the families would be expelled from their homes. They’d need to leave behind their houses, their jobs, and their beautiful greenhouses.

They’d need to leave it all behind and not look back.

That didn’t stop the Harush family from continuing the work on their home. They had only recently started their renovations. They never believed they’d actually be kicked out. Their house became known to the community as “The House of Faith,”  the house of strength. The community saw them building despite what they were being told. They had faith and hope that it was all a bad dream and the disengagement would never happen.

But the disengagement did happen. It was heartbreaking. Yedidya recounts how horrible it was to say goodbye to everything. To see the homes destroyed. His own home, bulldozed in front of his eyes. Flattened in under 3 hours. They all felt betrayed by their government. The same government that convinced them to move there and develop the area in the first place.

Yedidya says they built their homes with tears.

With the blood of the ones killed.

Now he was 17. He had no school. It was destroyed.

He had been a basketball player. On August 15th,  the day of the eviction, he played basketball on the court with his friends. They played on their land until the very last moments. They played through the anguish, through the devastating realization that this would be the last time playing basketball in their community.

These moments were televised.

Tal Brody, an American-Israeli former basketball player, Israel’s first modern-day sports hero, saw Yedidya playing on television. He felt the pain he was going through and wanted to help him. Tal Brody set him up with a basketball scholarship in MAYHS High School in Highland Park, NJ.

Yedidya left Israel. He left all he knew behind. To start over in a foreign land. With a foreign language. Such bravery from someone so young.

While there, he acclimated to his new life. He learned English, but even more exciting, he was a part of the first ever basketball championship for his new school.

Yedidya learned something so important from his time in the States. He learned about Zionism from the perspective of American Jews and realized that by living in Israel, you are responsible for all Jews, not just Israeli Jews. He understood that Israeli Jews are on the front line of everything- of terror and anti-Semitism. These American Jews gave him the strength to return to Israel. So instead of using his full scholarship to Yeshiva University, he returned to Israel to join the paratroopers unit in the IDF. First as a soldier, and then a commander. To defend the country that had let him down. The country that regardless of that fact, he loved, and wanted to defend.

After the army, he became a development officer of a town very close to Gaza, called Halutza. He is in charge of all the projects to develop the town as the JNF USA/Halutza liaison. He’s involved in building the synagogues, schools, and medical centers.

He followed in the footsteps of his parents to develop the land.

To develop Israel. His country.

To nurture it and help it flourish.

Yedidya and his wife, Shiran, do the most beautiful thing to show the terrorists that Israel is here to stay forever. They create stunning jewelry using the Qassam rockets that were fired by terrorists into their communities. They use these rockets to send a clear message to the terrorists- “You tried to destroy us. To kill us with these rockets. Well, you lost. We won. And now we make jewelry with the metal.”

Their jewelry business is called Rocket Necklace. To order your own beautiful custom-made necklace to show your support, email Stylishiran@gmail.com. To see the different styles, follow on Instagram.com/rocketnecklace.

Let’s hope and pray that no other Jewish community will ever be uprooted from their ancestral homeland of Israel. Thank you Yedidya, for giving me the opportunity to learn about your experiences. It was an honor to meet you. Kol Hakavod on all your important work for Israel.

I moved my family to Israel on August 23, 2015 from New Jersey, USA. My blog focuses on all the amazing experiences I come across while navigating through our new life in Israel. My other focus is to highlight the positivity of Israel to help inspire others to one day make the move too. If you have any questions about moving to Israel, please feel free to reach out on the Contact Me page or to my email TovaInIsraelBlog@gmail.com. Looking forward to hearing from you! See the behind the scenes of daily life on my Instagram @TovaInIsrael

Bat Mitzvah Party Recommendations for YOU! 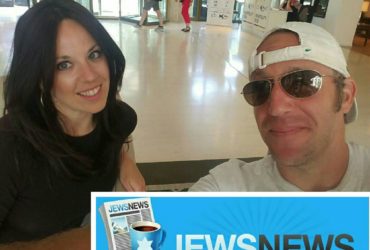 3 thoughts on “Gone from the Gush But Never Forgotten”

Tova In Israel on Social Media